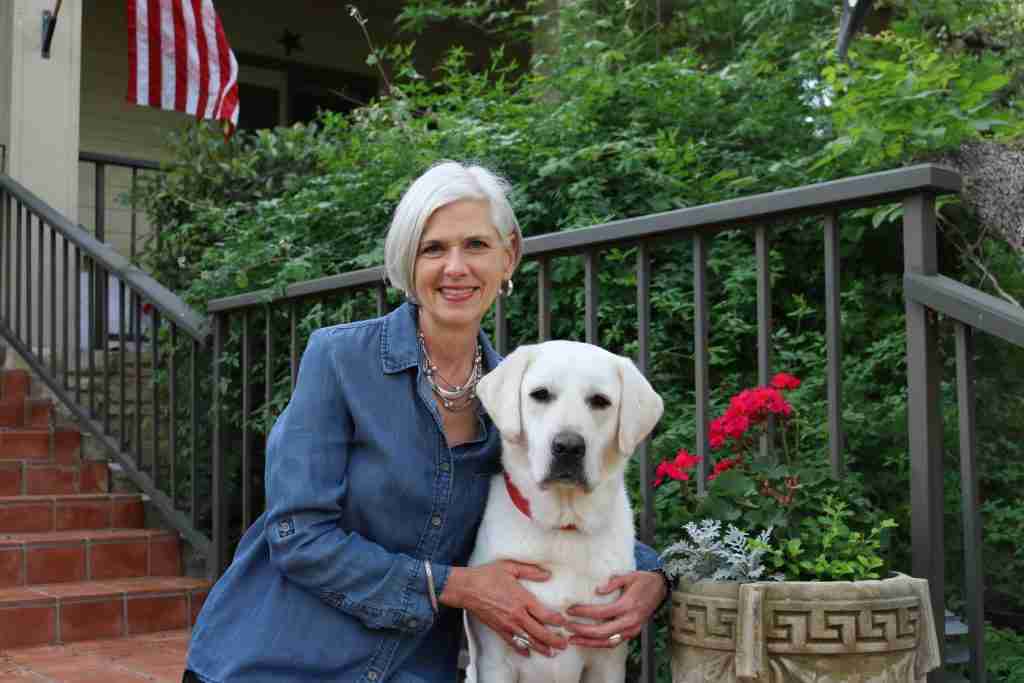 Camille has been a lifelong dog owner, as her canine adventures began with her childhood beagle, Barney. Over the years, she enjoyed and learned from caring for and training all her dogs.

Years later, she expanded her knowledge about aggressive dog training when her labrador retriever zoomed after he became anxious.

This playful looking habit was cute when he was a little puppy, but it became dangerous after he grew into an eighty-five pound dog. Blanco would nip at Camille’s arms, and even knock her down at times with his large zooming circles.

From her research, she learned that Blanco was trying to engage her in play when he zoomed. She realized later he also zoomed when he didn’t know what else to do with his boundless energy.

Camille hired multiple dog trainers to work with her and Blanco. None of them helped the problem despite promises and her spending a lot of time and money on dog training programs.

Blanco was labeled an aggressive dog because he had bitten her, even though in his mind he was playing. (He was probably the world’s only “aggressive” labrador due to their sweet nature!) This otherwise very well behaved labrador, however, would suddenly break into a dangerous zoom, particularly on their daily hikes, around flowing water, or even tall brustling grass.

One day in complete frustration, Camille seriously contemplated giving her beloved Blanco to someone who owned a farm after incurring numerous injuries. Her concern was that she may not always be so lucky as Blanco became rougher the older he got, and the older she got.

She went through four dog trainers that promised they could solve the problem and ended up wasting a lot of time and money. Camille later discovered numerous horrible stories about one of the trainers she had used after digging deeper online into reviews.

Finally, Camille found a retired executive turned dog trainer online that told her he could probably end the zooming in one session. Suspiciously, she hired him for one private dog training session as a last resort.

The dog trainer delivered. Long story short, it’s clear that Blanco is now proud to get his zooming under control whenever he gets triggered, which still happens occasionally.

At Pooch and Harmony, we believe that all dogs want to be well behaved, and Camille experienced this first hand as Blanco now circles around, and promptly and proudly sits next to her after he gets the zooming urge.

This story taught Camille the importance of finding the right dog trainer.

Of course, this is only one of the hundreds of dog experiences that inspire and influence Camille’s writing and focus here at Pooch and Harmony.